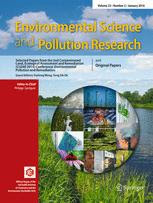 Pb pollution caused by shooting sport activities is a serious environmental problem that has increased considerably in recent decades. The aims of this study were firstly to analyze Pb pollution in soils from a trap shooting range abandoned in 1999, secondly to study the effectiveness of different extractants [CaCl2, DTPA, NH4OAc, low molecular weight organic acids (LMWOA), and bidistilled water (BDW)] in order to determine Pb bioavailability in these soils, and finally to evaluate the phytoremediation ability of spontaneous vegetation (Agrostis capillaris L.). To this end, 13 soils from an old trap shooting range (Galicia, NW Spain) were studied. It was found that Pb levels in the soils were higher than 100 mg kg−1, exceeding the generic reference levels, and three of these samples even exceeded the USEPA threshold level (400 mg kg−1). In general, the reagent that best represents Pb bioavailability and has the greatest extraction efficiency was CaCl2, followed by DTPA, NH4OAc, LMWOA, and BDW. A. capillaris Pb contents ranged between 9.82 and 1107.42 mg kg−1 (root) and between 6.43 and 135.23 mg kg−1 (shoot). Pb accumulation in roots, as well as the presence of secondary mineral phases of metallic Pb in the adjacent soil, showed the phytostabilization properties of A. capillaris.